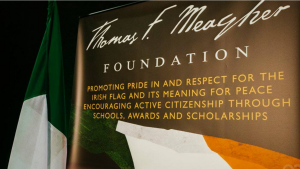 National Flag Day 2021
Second level schools all around the country will be taking part in the Foundation’s socially distant and virtual Flag Day tomorrow Tuesday 16th March on the eve of St. Patricks Day proudly demonstrating their commitment to active citizenship in their communities and their knowledge of our Flag’s message of peace and unity, by raising the Irish flag and recognising the flags of all nationalities in their communities. In a modern and diverse Ireland, it is critical that people of all backgrounds and creeds understand and gather around the meaning of the Irish flag for peace, respect, diversity and inclusion. The raising of the flag particularly in 2021 symbolises a “coming together” to create a community of hope for Irelands’ future. 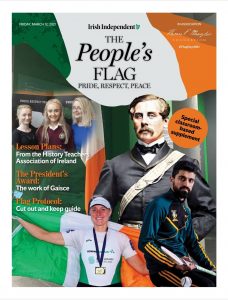 The Supplement this year included our fantastic Kerry Group Awards & Scholarship Winners, our Challenge Partner Gaisce (The Presidents Awards) amazing work with young people, Local Authorities supporting our schools, articles on the battle for women’s rights in Ireland after partition and the Spanish Flu pandemic in 1918-19 plus four lesson plans with themes exploring cultural identity both North and South after partition including a lesson plan as Gaeilge and much more.

The Thomas F. Meagher Foundation Honorary Board – Ambassadors for the Foundation

In the run up to this years Flag Day our wonderful Honorary Board Member Packie Bonner made some media appearances in the past week.  Appearing on the Six O’ Clock show speaking about the importance of Flag Day as well as reminiscing about Italia’90 and on the Elaine Show on Friday afternoon – both are available on the Virgin media TV player here.

There was also an excellent article written by Richard Hogan for the Examiner last week featuring Packie and Sanita Puspure on the true meaning of our flag.

Sanita and Zak Moradi contributed to the opening article of the supplement and were interviewed by the features editor for the Irish Independent.

Packie will also be chatting to Ray D’Arcy on RTE Radio 1 @ 3.30pm tomorrow Flag Day. We would like to say a special word of thanks to Packie for his incredible support this past week and also extend our thanks to Sanita and Zak for their valuable contributions during these busy times.

We would also like to give a warm welcome to our new Honorary Board Members who have joined us recently, Zak Moradi, Adam Byrne, Colm Cooper, Edwina Guckian, Diarmuid Gavin, Matt Molloy and Clive Byrne. All of our ambassadors play a pivotal role in success of the Foundation helping to share our message and we are truly grateful. 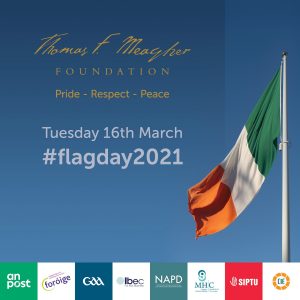